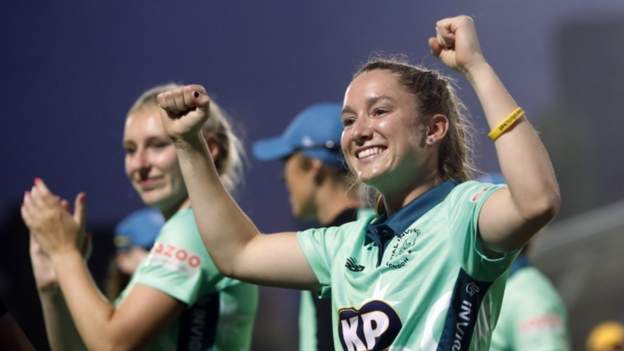 The Hundred starts with fireworks, DJs and a brilliant match on opening night

As the opening nights went on, The Hundred’s was surely as good as the organizers could have hoped for.

A record crowd and a thrilling win for Oval Invincibles over Manchester Originals told only half the story.

As the match reached its climax, a noise alien to English cricket stadiums circled a pitch.

Not 80s classics sung by well-oiled fans or roaring chants in support of the home team.

Instead, a rhythmic and exciting clap.

A young crowd was obsessed not with the halftime music numbers or the fireworks, but with the sport unfolding before their eyes.

It was cricket, but not as we’ve known it.

The debate since the announcement of The Hundred, the newest 100-ball-per-set format of cricket three years ago, has been one of the most intense cricket has ever seen.

The neon green and pink fireworks, shot from the roof of The Oval’s historic pavilion as players first appeared on the pitch, were almost a metaphor for the disharmony that has divided a sport.

The issues raised by tournament critics don’t go away after a game.

But, for a format touted as an opportunity to engage new audiences, it was an encouraging start.

The crowd was undoubtedly younger and more diverse than that of the men’s internationals or the current Twenty20 Blast.

Groups of young girls roamed the famous old land. Families were seated with children too small to hold a cricket ball, let alone swing a bat.

Instead of bars, caterers selling pizza and ice cream have the longest lines.

Onlookers went “oooh-ed” and “ahhh-ed” at six or four and cheered Manchester Originals player Kate Cross to the fold for a hat-trick, but there was a different feeling.

There is room at cricket for both – no one at Trent Bridge for Pakistan’s raucous victory over England last Friday I would have liked it otherwise – but the atmosphere was more like a chilled rooftop bar than a boozy bachelor party.

The screams of Sweet Caroline, a staple of the cricket grounds in recent years, have been replaced by the relaxed mixes of the resident DJ located in the booth.

That same scene housed both the pre-game draw and a performance by singer Becky Hill, a recent top of the list, during the break between sets.

Other new inclusions were white cards waved by the referees to signal the end of a bowler’s five-ball game, an LED tunnel through which players entered the field and flames that erupted from the edge of the field. the border after a four, six or wicket.

In total, around 7,400 people attended the match, a number considered a record for a professional women’s cricket match anywhere in the world.

A lot of these were given away for free – but when the item grows in the game, does it really matter?

Some purists may have been put off – others may not have watched at all – but there have been times for them, too.

A graceful four on extra cover by Harmanpreet Kaur from Manchester would have impressed anyone. She showed the touch and skill of late Wimbledon champion Ashleigh Barty, another who knows a thing or two about cricket.

But the best was yet to come.

As the Oval Invincibles work their way into a contest that the Originals looked set to win, the tension increased.

Cricket has become the main event.

When Mady Villiers hit her England teammate Sophie Ecclestone, the world’s number one T20 pitching, for six with 10 balls to go, the crowd rose.

Moments later, Invincibles captain Dane van Niekerk scored the winning points with just two balls left. The biggest skeptics of the Hundred would have been moved at the sight of young and old spectators dancing in the stands.

“We couldn’t have asked for better to create a real buzz around the tournament,” said England captain Heather Knight, a member of the BBC’s commentary team.

“It was electric,” added an exhausted Van Niekerk.

“The crowd was amazing. I don’t think I’ve ever played a national game – except for the semi-finals and [Australian T20 competition] the Big Bash – in an atmosphere like this. “

The Origins Cross skipper may have been beaten, but she was smiling when she spoke after the game.

“This is the loudest crowd I have ever played in front of, including international cricket,” she said.

The Oval is expected to be near full capacity on Thursday when the same two teams open the men’s competition.

The next question: Can men ride the wave that women have provided?

12 tips for safe dining in a restaurant