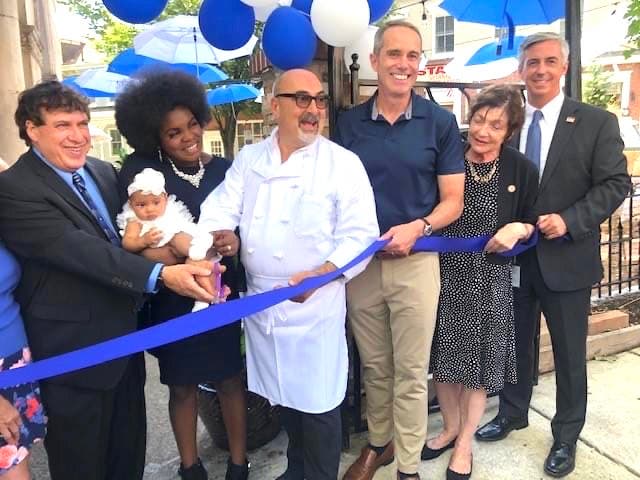 The new dining venue offers an extensive menu for breakfast, lunch and dinner as well as an authentic Jewish deli where customers can order freshly cut meats and cheeses, bagels and assorted breads, salads, lox, chopped liver with onions and much more.

Senator Santarsiero picked up a loaf of fresh challah bread after helping cut the ribbon.

“It’s a great addition to Doylestown. Doylestown already has so many great dining options. It’s going to be a complement to what already exists,” he said.

“We are thrilled,” added Mayor West. “And we wish Federico the best. The whole town is thrilled to have a Jewish grocery store in town and it looks fabulous. It’s a nice addition to Doylestown.

Councilor Wendy Margolis added, “We are excited to have more ethnic options in Doylestown. It is fabulous. And being Jewish myself, I’m very happy to have a grocery store in town. Everyone is really excited and the food looks amazing. We don’t have a deli in Doylestown so that’s fine.

At Matzah Balls, customers will find all of their favorite Jewish comfort foods such as corned beef and pastrami sandwiches, beef brisket, kasha and bow ties, Reuben and Rachel sandwiches, and of course its namesake, the Matzah Ball soup, served in a soup bowl. tureen.

And the food is going to be spectacular, promises owner and master chef Federico, who has lived in Doylestown since arriving in America in 1979. “I have to be honest with you, I ate pastrami like there was no tomorrow.”

Breakfast will be served all day and will include farm-fresh eggs and fluffy omelettes, Belgian waffles, French toast Challah, fried matzah, pancakes and bagels.

Diners are also encouraged to save room for a slice of authentic Jewish apple cake, an old-fashioned egg custard soda, a slice of New York cheesecake or Babka cake, sundaes and milkshakes.

Federico is a well-known restaurateur in Bucks-Mont who has opened 17 other popular fine-dining restaurants over the past 40 years, including Fountainside Seafood & Grille, Ariana’s Ristorante Italiano and most recently La Dolce Vita Da Franco where he built his home a loyal clientele.

“Everything I did was with my heart and with passion,” Federico said.

Matzah
The balls, Federico said, are his way of honoring his Italian-Jewish heritage by combining his love of cooking and being the ultimate host. That’s why every adult who orders a full dinner will be offered a free glass of Kosher Asti wine from Italy.

“I hope Doylestown enjoys this. It will be something new and I will do my best to satisfy their palates,” Federico said.