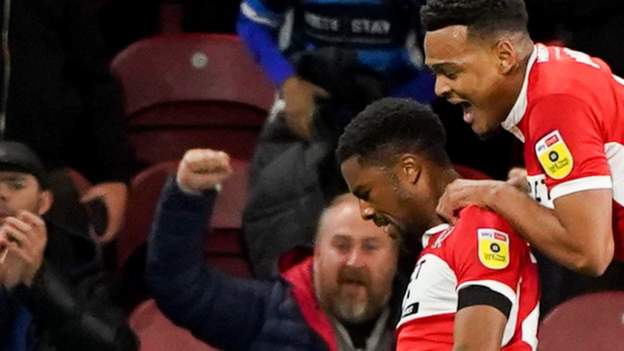 Managerless Middlesbrough beat Birmingham City at the Riverside to climb out of the Championship relegation zone.

Chuba Akpom reacted quickest to the Blues’ failure to manage a low corner to score the decisive goal in Boro’s first game since Chris Wilder was sacked.

Zack Steffen ensured they retained the lead at the break, denying Scott Hogan after intercepting a weak back pass from Anfernee Dijksteel.

Steffen also crucially saved efforts from Tahith Chong and Emmanuel Longelo, while Boro was prevented from scoring another second-half goal for offside when Marcus Forss drove the ball home after Rodrigo Muniz struck in bar.

A miserable run of just two wins from 11 games to start the Championship season – Boro’s worst start to a campaign since 1985 – cost Wilder his job at Teesside on Monday.

Boro looked lucky not to have sent off Paddy McNair in the 15th minute when he pulled off Hogan’s shirt as the ball broke behind the defence. A yellow card was all that was issued, Juninho Bacuna then sent a free kick wide.

A low corner from Ryan Giles, who leapt across the box and hit a Blues defender at the back post, propelled Akpom towards his goal.

A stray back pass from Dijksteel nearly gifted the Blues an equaliser, with Hogan gaining possession only to be denied by goalkeeper Steffen.

Both teams threatened early in the second half, with Steffen saving Chong as Boro’s Hayden Hackney sent an effort over the bar at the other end.

A fingertip save from Steffen sent a free-kick from Longelo over the bar as the Blues pressed to equalise, while the linesman’s flag was all that stopped Forss making it two for the hosts when he tapped close range after Muniz’s header. the bar fell in his way.

Patriots must bring back full-time jerseys