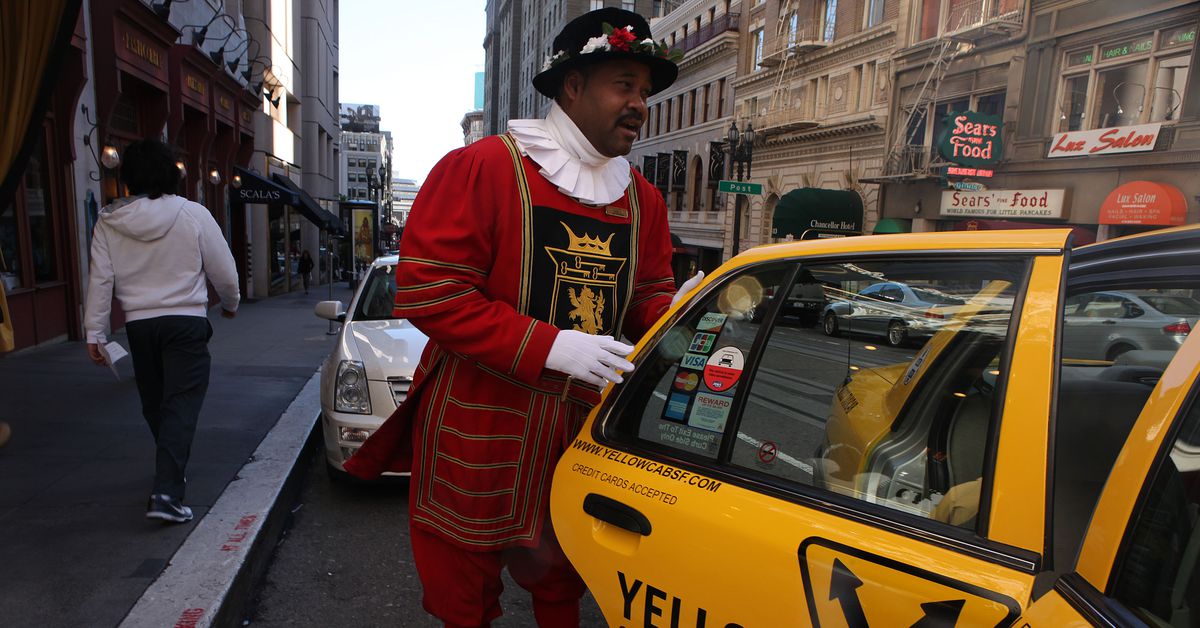 It’s a familiar tale to those who’ve lived in San Francisco long enough when the end of one city tradition must make way for a new one. And with the reopening of the Sir Francis Drake Hotel as Beacon Grand this spring, the Beefeaters’ 80-year-old tradition has come to an end. But for Eddie Strickland, who wore the red uniform at the Union Square Hotel for nearly 20 years, the tradition lives on in a new way: Strickland hangs his flower-trimmed hats in four San Francisco restaurants, symbols of a bygone era. .

Strickland can trace his journey from a doorman at the Sheraton Fisherman’s Wharf to an audition in front of five managers for the job of doorman at the Sir Francis Drake Hotel to an appearance (of sorts) in Jennifer Aniston’s 2005 film, “Rumor Has It”. There were lunches every December when a group of hotel doormen from across the city met at restaurants ranging from Lefty O’Doul’s to Morton’s to Moose’s in North Beach to Castagnola’s on the wharf. “We would normally have about 35 doormen – and now remember we’re in uniform – so when we went to those lunches where you had 35 guys and all these different colored uniforms and so on, we’d have fun,” recalls Strickland.

Strickland credits former Beefeater and doorman Tom Sweeney with starting the tradition of leaving behind a Beefeater hat at San Francisco’s iconic restaurants; now Strickland will end it. Sweeney retired in January 2020 after 43 years, and somewhere along the way left his hat to the owners of Original Joe’s in North Beach. It was during dinner at this restaurant that Strickland noticed the familiar wide-brimmed hat at the bar. He knew it couldn’t belong to LaBan Wade, another 20-year Beefeater veteran, and figured it had to be Sweeney’s.

Although both Strickland and Wade were laid off in March 2020 when the hotel closed as part of the citywide shutdown, Strickland hung on to his hats until a month ago, when he decided to part with it at his favorite spots in town: So far, Strickland has given away hats to 7 Mile House and Old Clam House, with two more to give away. “Through all these years we’ve had relationships with these restaurants and that’s how it all started,” Strickland says. “And then all I do is end things, kind of, because there’s no more of us.”

Original Joe’s owners John and Elena Duggan say their family restaurant’s ties to local hotels date back to when the restaurant first resided at 144 Taylor Street in the Tenderloin. “Tom and his colleagues at the door, they had their finger on the pulse of San Francisco in every way,” says John Duggan. “It was a one-stop shop to get a true picture of what was happening in San Francisco.” When the restaurant moved to North Beach in 2012, the Duggans hosted the annual Doormen’s Luncheon, which was attended by former mayors Ed Lee and Willie Brown. The Duggans do not recall when Sweeney’s hat came into their possession, but agree that keeping the hat is humble and an honor, calling the hotel doormen “great ambassadors of San Francisco”.

Elena Duggan says hats are a “classic symbol of old San Francisco,” synonymous with hospitality in the city. “We look at this hat and it’s just a reminder of who and what we want to be,” she says. “To take care of our guests and to offer the best hospitality and to be the best possible ambassadors, in the city that we love so much and in which we were born and raised.”

7 Mile House owner Vanessa Garcia agrees that receiving a hat is an honor, acknowledging the selflessness of giving something so important to former doormen. “It’s something to be exhibited, it’s something to be proud of, something not to be forgotten,” she said. “I think that should make people believe that they shouldn’t take anything for granted.”

Already, Strickland is pondering where his final two Beefeater hats will land. The places chosen so far are places he and Sweeney have frequented, places they have a relationship with and are San Francisco must-sees. Filomena Florese, owner of Old Clam House, says it’s fitting that this piece of San Francisco history is housed in one of San Francisco’s oldest restaurants.

John Duggan says the end of the Beefeaters signals the dwindling number of enduring San Francisco traditions. “We pride ourselves on always being relevant and continuing to see this as one of our responsibilities going forward, representing San Francisco and its history,” he said. In that vein, the Duggans want to host an upcoming Porters Luncheon at their restaurant, hoping to keep that tradition alive.

Some of the hats are being prepared for display: Garcia is planning a showcase for the hat at 7 Mile House; the Duggans keep their hat in their office while they figure out where to display it; meanwhile, the Old Clam House has its hat dangling from the lip of the back bar. But for Garcia, the hat is not only a reminder of the city’s history, but also of the customer service the restaurants provide to their customers. “It really gives so much satisfaction because it makes me think, ‘Hey, we weren’t just a restaurant to him, we actually meant something more to him than just a place to eat,'” Garcia says. “I’m not here to feed people, I’m here to create amazing, unforgettable experiences for people who come to visit me – and so that’s way more important and far more important than feeding people.”